Organising Active Directory is a very powerful and flexible way to manage your school network. In this tutorial, we are going to create a basic structure that will allow us to manage both users and computers in a single branch.

Open Active Directory Users and Computers, by following the links in the Administrative Tools Start menu in Windows Server 2003. 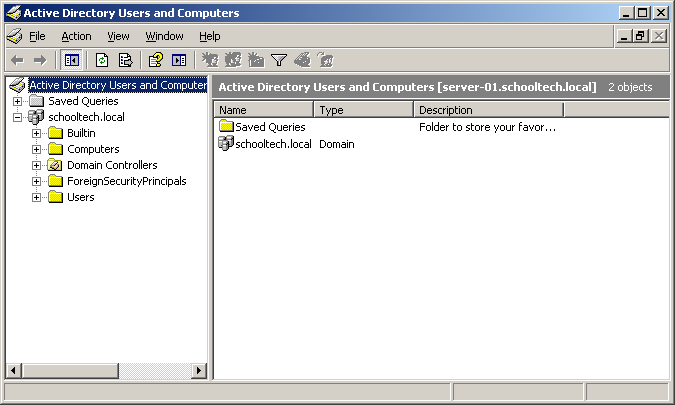 The above picture shows an unconfigured Active Directory structure.  Before we go to far into creating our own structure, it is important to understand why Microsoft has created a default structure.  In the old days before Active Directory, NT4 used to make a distinction between groups and users and that was it.  Active Directory changed the landscape by showing Users and Groups in the same place.  Allowing an administrator to keep users and specific security groups together.

The Default Active Directory structure has the following containers;

A simple extension to the Active Directory gives a lot more configuration choices and a better way of organising Active Director to manage school users and machines.

Right click on the Domain level branch of the Active Directory structure.  On my domain, I have right clicked on schooltech.local.  Choose New > Organisation Unit. 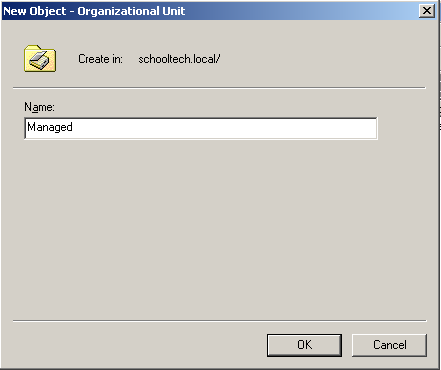 Enter the name of your OU, I have called my Managed, as I am going to use this to manage the entire structure of my network.  Click OK and you will see the new OU inside of Active Directory Users and Computers.

We now have a structure that contains an area for our school computers.  We can now begin adding further detail, added more layers as appropriate.

You can think of the Computers Organisational Unit as the various locations in your school.  You can make them as complex or as simplistic as you need.

What are the Advantages of Managed > Computers?

There are several advantages of using this approach.  You can use the locations to keep track of computers.  Active Directory Group Policy will also come into its own, allowing you to assign software to the whole site, or individual rooms.  You can also assign printers to areas or rooms using Group Policy.

Hopefully you can see how this approach will apply to your individual school needs, although you might not fully appriciate putting in all this work until you learn a little more about Group Policy.

The same approach can be applied to network users in the school.  You can separate Administration staff, teachers, network support and students from each other.

We now have a structure that contains an area for our school computers.  We can now begin adding further detail, added more layers as appropriate.

In the example above, I have deliberately used areas such as “Year 7” so that you can see the context of how this structure could be used.  However you will find it much easier to use the Intake Years, that way you won’t need to spend hours moving files and changing groups of users around.

I have implemented an example structure in my Active Directory forest which best matches my needs.  I have also designed the structure so that it closely matches the folder structure that I have created on the server hard drive. 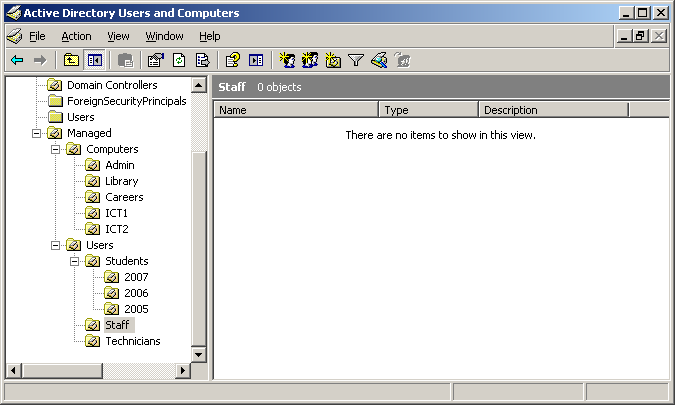